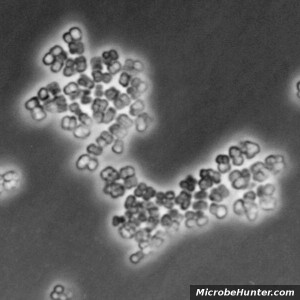 How the bacteria were prepared

The bacteria were grown in pure culture in an appropriate microbiology laboratory. A colony was then suspended in saline (salt water) of right concentration and then microscoped with a 1000x magnification in oil immersion (using a 100x oil objective).

If one takes too much liquid, then the cells start to float in and out of focus and it is not easily possible to capture the shape of the individual cells. A similar problem can occur if the cells are much smaller than the film of liquid between the slide and cover slip. The evaporation of the liquid from the edges of the cover slip will cause a constant movement of the cells and make it difficult to take a steady picture. In this case it is necessary to heat-fix the bacteria. A colony was then suspended in saline and dried at room temperature. The slide was briefly pulled through the flame of a Bunsen burner, with the bacteria on the opposite side of the the flame. This heating process fixed the bacteria to the glass slide. Immersion oil was then directly applied to the slide and the bacteria were observed without cover glass. One disadvantage of heat fixing is, that during the drying process the bacteria may aggregate (as the volume of liquid decreases) and it may become more difficult to see individual cells.

The pictures were taken on analog B/W film and then digitized with a camera and an adapter (see the following post for more info on the set-up: Digitizing photographic slides with a digital camera). The negative was then inverted and the contrast levels adjusted. The soft, slightly blurry appearance of the pictures shows that we are already at the limits of the resolution. The images were not sharpened. Notice the bright halo around the bacterial cells. This is typical for phase contrast microscopy.

12 thoughts on “Bacteria in phase contrast”