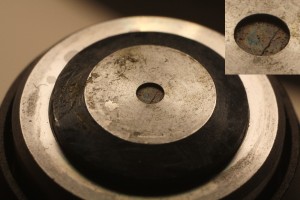 The microscopes in the school where I work have been in operation almost 30 years (!!) now. And the fact that most of them have remained usable says quite something about the quality of these devices. They are soon going to be collectively sent in for maintenance, and this is the last opportunity to do a little quality check.

Most devices were still in a reasonably good condition, with the biggest problems in the mechanics. A check of the optics revealed that most of them were still quite OK, but the 40x objective of one of the scopes was in a particular desolate condition. A macro image of the front lens can be seen on the right. I suspect highly that one of two things happened to the objective:

The objective could have been rotated into immersion oil and was subsequently not cleaned. Students sometimes want to use a lower magnification after they used the 100x oil immersion objective.

The origin of the crack in the lens, remains a mystery. The lens is spring loaded , and retracts when crashed into the specimen.

The resulting image was not usable at all. I included two pictures of the same area, one with an intact 40x and one with the dirty and cracked objective from above. I think that the two images speak for themselves.

What do we learn from this? Proper microscope instruction saves money. And be really careful about using immersion oil and resin in the classroom. Don’t even get the students into the position of making such mistakes. In my view, a 100x oil immersion objective is not even necessary for most microscopic work (unless you deliberately want to teach the students different microscopic techniques). Remove the objectives from the microscopes and store them in a safe place.