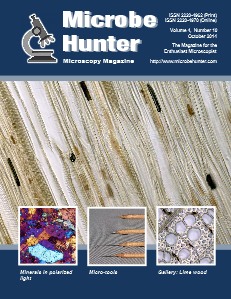 Welcome to MicrobeHunter Microscopy Magazine. You can download the PDF and order a printed version.

At this point I would also like to encourage all readers to participate by writing articles (short and long). Read the submissions page for more information.

Flatworms
Flatworms have an incredible ability to regenerate. This is also due to their relatively simple structure.
Oliver Kim

Micaceous Sandstone: Sandstone with mica
The mica minerals are made of sheet silicates. These minerals can also be found in sandstone and can be observed in polarized light.
Carl Hennig

A specimen of some Observations made by a Microscpe
In his letter, Leewenhoeck describes a mould, the stinger of a bee, the head of a bee, the eye of a bee and a louse. The language and capitalization of words are as in the original document.
A. v. Leewenhoeck
comments by Oliver Kim

The 1-stop-shop (US and World)
Lots of microscopy-products
from Amazon here!
For the Europe Shop click here!