This is the place where collectors can discuss their passion.
Post Reply
10 posts • Page 1 of 1
Message
Author

I’ve been trying to find out when Bausch&Lomb first introduced this distinctive binocular prism housing.
I have a stand from 1946 equipped with one, (not this one) and I can’t find an image of one before 1940 or so.
I’m curious because they look a bit art deco ish to me.

Anyone have a clue?
Thanks,
Radazz 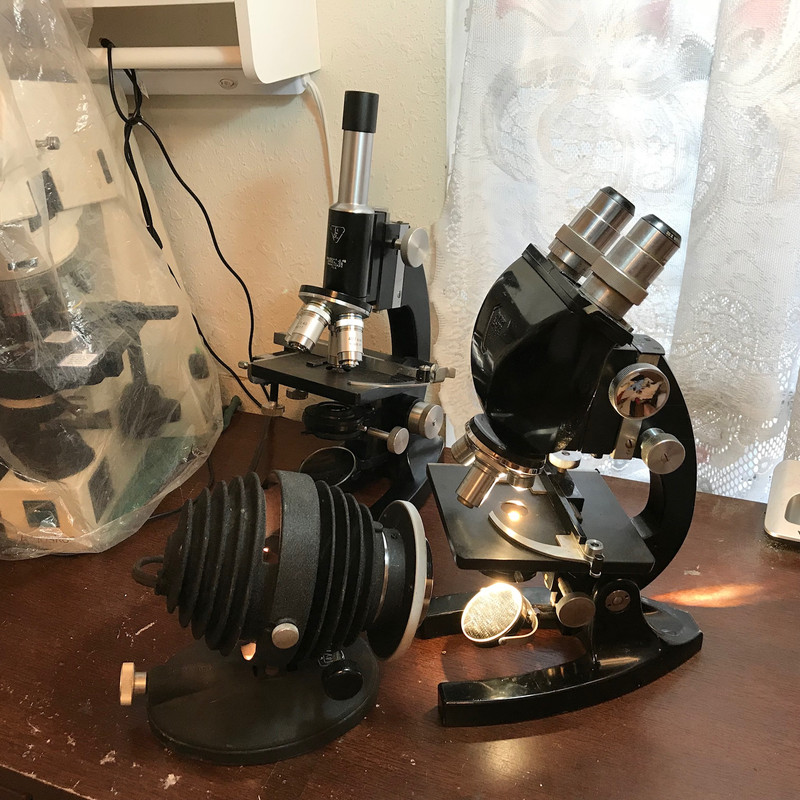 One of the clues, is W.W. II. The American microscope makers went on a bit of a hiatus during the war, deleting numerous production items from their catalogues and in some cases diverting production over to other optical products of necessity to the military effort.
The microscope designs of the late 30's were kept pretty stagnant until the end of the war, when both Spencer and B & L embarked on wholly new designs.
You don't find many B & L microscopes around from the 1939-1945 period and Spencer severely reduced their stocklist, although they appear to have continued as a microscope supplier. You see a lot of Spencer microscopes with a U.S. Navy or other military medical logo stamped on them. I can't recall a B & L instrument with the same on it but they probably exist .
The military needed binoculars, so much so, that advertisements were placed in newspapers for civilians to turn in their Bausch & Lomb or Zeiss binoculars over to the U.S. Navy, so they could be assessed for military use. B & L had originally licensed Zeiss's porro prism design, back at the turn of the century and had continued producing Zeiss designs under license for a long time. The parts for the two brands probably had a degree of interchangeability. Since B & L had the design and manufacturing facilities, they became a supplier of binocular parts to other companies, whose production was needed to fill the enormous requirements of the U.S. military; Kollsman Instrument co.(Square D) under the SARD brand, Universal Camera Corp., Anchor Optical Corp. Hayward Lumber and Investment Co.,National Instrument Corp.,Optical Film and Supply co. and Spencer Lens Co., and as well, likely, the 63,500 square foot U.S. Navy Optical facility at the Washington Naval Yard.

After W.W. II , B & L probably went full bore into redesigning their aging, 1930's vintage microscope stable and that bulbous binocular head would have first seen the light of day sometime after . I'm pretty sure the original model it was featured on was the first Dynoptic, like the one you picture with the high fine focus. I'm not sure that the design was so much art deco as form follows function for them.
Top

I'm not a collector and I'm nowhere near as knowledgeable as Phil is, but I too have never seen that particular style of binocular head on anything but the Bausch and Lomb Dynoptics. Their earlier binocular scopes - I don't know the model name - had binocular heads with flatter, more angular surfaces. The earlier Dynoptics from the forties had the high fine focus knobs; then later models in the fifties had the low fine focus and different knurling style for the objective barrels. Apparently that was their answer to American Optical/Spencer's 15/35 series which was brought out at about the same time and replaced their earlier 13/33 series. Bausch and Lomb not only used the Dynoptic as their basic lab scope stand, but even used it as the basis of their research models for a time. I've seen one fitted with full apochromat optics and a graduated, circular stage.

I have one of the later Dynoptic lab scopes with the low fine focus - similar to the one in the first photo above. I find it particularly comfortable to use, because it does not have converging eyepiece tubes like the Spencers I own. With Spencers one has to hold one's head and eyes at just a particular distance and angle to get the image in each ocular tube to merge. I had a bit of difficulty merging the images from the parallel tubes of the Dynoptic at first, but once I learned to do so, it became easy; I like it.

Once - a few years back - I saw a trinocular version of one of those heads for sale on Ebay; I could still kick myself for not having bought it. Oh, and for what it's worth, I've seen that particular style of binocular head referred to as a pigeon's breast binocular - a particularly apt description, I think.

An excellent first person comparison, and explanation of the design differences, JIm.

Spencer stuck with that convergent head, right up until the series 100 emerged, introducing the one modification with the series 10/20 of having a travelling tube lens to maintain focus through the interpupillary adjustment range.. The 100 and 400 series adopted Seidentopf heads.

Digging down into the B & L parallel tube head, and following through the necessity for some physical width to incorporate such a design, the later Dynoptic, which morphed into the Dynazoom, also sported a wide oversized head, of a decidedly cab over engine design, somewhat resembling the 1963 Studebaker Westinghouse Pickup truck. Later yet, when the Balplan saw the light of day, who would have ever thought that B & L in the late 60's, would have presaged so much and adopted such a potentially green design ; for it's new , wide field head seems spawned from the roof of a Frank Lloyd Wright prairie style villa and sports enough acreage on it's sloping overhang, to fit a considerable array of solar panels.
Top

I so enjoy Jim/ a patient spider's apt description for that organically curvaceous head: 'pigeon breast'...I never heard it before! B&L's 1929 (yup...stock market crash 1929) release of a research microscope with the stage open to the operator, and it's support arm(s) away from the operator...the B&L DDE models...these had the flat and boxy angular binoc head Jim just mentioned as comeing before appearance of curvaceous 'pigeon heads' form. Manuel de Cero et al, in UK/Miscape talks about the rise and fall of B&L DDE...and Radaz (OP) notes he found the curvaceous head to be circa 1946...seems 1946 right about the inception of this body design (my guess).

This discussion great..my sense is the exact reverse in body lines and grace occurred with Reichert stands of immediate post WWII period..the Reichert Austria Zetopan, went from organic curves and round bodies..to harsh angular flat boxy shapes produced latter. I have a Reicher/Austria Biozet ( the student biologic nephew-stand of the Zetopan?!)..it is a celebration of those organic curves and roundish-head which the Zeiss Opton W, and so many other stands post WWII manifested.

So B&L ran the curvaceous body line after the earlier flat/angular lines of their DDE research stands, it seems to me. Thanks for a great thread...I would hope that Radaz (OP) can now tell us the serial number of his 'pigeon breast' stand? I have a B&L metalograph stand with the identical 'pigeon breast' as his depicted stand. thanks all, Charlie guevara
Top

that’s great.
It would seem like time stopped for any microscope production during WWII in favor of binoculars and military sights.
And I would love to have a DDE.
Arnold, Missouri
Olympus IX70
Olympus BX40
Olympus SZ40
Top

DDE's are very hard to come by, especially at a price that makes sense. They were made for quite a while but not very many were sold. Even rarer is the Spencer # 8, a similar reversed concept, of which only a handful exist.
A nice option to the DDE and much more likely found at a good price are one of the other G type research stands that they made. These were conventional horseshoe base designs but still could be fitted with most of the features the DDE could be. They are of a heavy, cast iron and cast brass construction.

B & L were a little late to the party, with a low fine focus, first introducing the concept with the horseshoe Dynoptic, a microscope that served double duty for many years as both a lab and research instrument, while they worked out the design for their first microscope with an in base illumination system.

I never dreamed I would own two Wild Heerbrugg M20s, so I guess I can dream

Actually, they were both stupid expensive, so this one will probably remain a dream.
Arnold, Missouri
Olympus IX70
Olympus BX40
Olympus SZ40
Top
Post Reply
10 posts • Page 1 of 1