This is the place where collectors can discuss their passion.
Post Reply
13 posts • Page 1 of 1
Message
Author

Not sure if this is the proper forum to ask this.
Two of the 1940s B&L iron stands in my collection have very stiff fine focus knobs. I don’t want to force them, and need to clean and re-lube them, but I cannot figure out how to get to the mechanism.
Does anyone know if there are any exploded diagrams anywhere? I seriously doubt it from what I’ve been able to find.
Better yet, does anyone know how to get to the fine focus mechanism?
It looks like the tube rack needs to come off but I can’t see how it works.
Please help
Jim
Arnold, Missouri
Olympus IX70
Olympus BX40
Olympus SZ40
Top

Photos of your microscope would be helpful.

Do these have a ball track for the fine focus or a plain dovetail glide? The mechanisms are different for each and they come apart differently.
Top

I looked at the pictures you had posted earlier ...your family portrait of B & L. The two on the right have the same type of fine focus, with a ball track. The jug handle is a simpler dovetail slide type.

I am assuming these are the microscopes with the frozen fine focus?
Top

Here are the two scopes in question.the left one dates 1942; the one on the right dates 1947.
They appear to be identical up to the tube rack, the right one has the interchangeable tubus assembly.
I’ve never seen a manual, so I don’t know if it is a screw and rocker like the Spencer or what.
Can’t figure out how to get to it, and I’d rather not blindly mess around and make things worse. 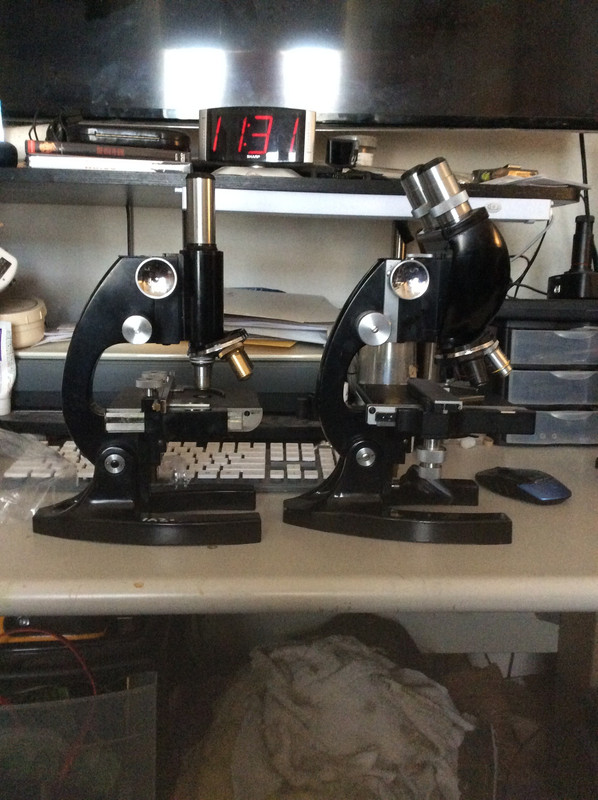 And a couple more shots with the tubes racked off.

I use a fine penetrating oil called "Rem Oil" that can be bought at WalMart.. it is very thin and works wonders on frozen mechanics..

For disassembly you probably have to remove two screws to get a little plate on top of the focussing mechanism out of the way. You then should be able to see how the mechanism gets apart. For initial degumming it is advisable to remove all optical parts before the use of penetrating oil. Gentle application of heat makes gummed up grease softer.

Billbilt has a pretty appropriate idea. It does save a lot of time to dissolve the hardened grease with a thin oil solvent. More often than not, this will do the trick. The pitfalls of using such a technique are 1) overshooting the amount needed and thinning the existing hardened lubricant too much, and 2) not being able to easily target some areas that need re-lubricating effectively. The key points that cause the most stiffness are the sleeve bearings on each side of the pinion shaft and the dovetail slide itself. Getting some fine oil....that Billbilt recommended, other penetrating oil , fine shaver oil or watch oil, even WD 40, if you can stand the smell of it along the seams between the focus block and the arm and where the fine focus knob meets the micrometer scale on the right side and the arm on the left, one drop initially at each point, might do the job. Use gravity to allow the oil in, one joint at a time; trying to work the parts as much as possible.
With the Dynoptic, partial disassembly is all you really need do. I would suggest removing the brushed chrome plates from each side of the ball track, one at a time and see what the grease status is first. Adding a small amount of fine oil, more precisely at critical points, to soften the grease might be pretty effective. The ball track is unlikely to be the problem but there are only 4 balls per side, so it wouldn't take too many of them to be stiff to cause a problem. Removing the outer part of the track does allow the focus block to separate from the arm somewhat, so cleaning that up and re-lubricating is pretty easy at that point. However, the fine focus shaft grease is likely to be the main culprit with the Dynoptic too, so inserting small amounts of oil and trying to work it into the shaft/sleeve space will likely be the main objective. The mechanism between the low focus controls is just a type of link, so there isn't any chance of that being the problem.
If you want to disassemble the older stand, instead.
That 1942 scope has a dovetail slide type of f.f. and the Dynoptic has a ball race slide. The 1942 scope has a stop plate above the arm( might say BB *** on the plate), fastened with two screws. Removing the two screws and plate, allows the tension spring to be removed and the fine focus block can then be slid upwards off of the dovetail, revealing the cantilever mechanism. There is reasonable access to the inside of the pinion sleeve bearing, with the focus block removed. Removing the pinion shaft is a pain. It is much more practical to inject a thinning oil and work the shaft well.
Top

I was thinking I worked on a B&L one time and it had a spring(s) under the little cover marked with the red arrow.. i think it was under some compression and had a tendency to fly out of it's mounting.. Just something to look for..
Top

Yes. The top plate is a backing plate or tension plate. It collapses a spring, which causes down pressure on the focus block, otherwise it would only move down by gravity alone. Removing the screws while holding the plate down with ones finger, is a must.
Top

Heat did the trick for both scopes. Thanks everyone for the suggestions. They will all go into my bag of tricks.
Arnold, Missouri
Olympus IX70
Olympus BX40
Olympus SZ40
Top
Post Reply
13 posts • Page 1 of 1