by lperepol
How close can a fungus be identified from these pictures? It was found growing on the base of a cauliflower stem in Southern British Columbia (Kootenay Area) in a greenhouse. Temperature low high in the greenhouse for the last week was 5.8° to 31.3° C.
More pictures here:
https://photos.app.goo.gl/XQw5iiVdxVgTQgRY9 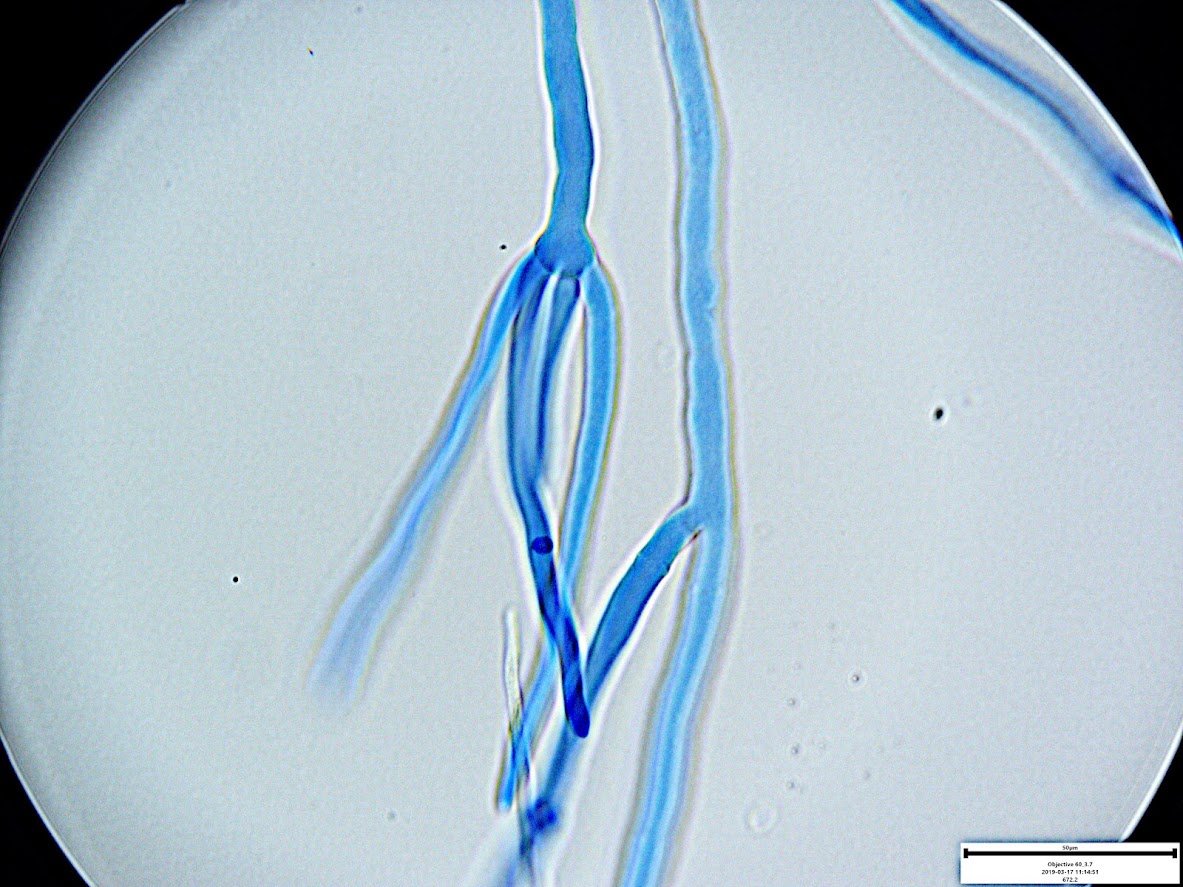 by apochronaut
There are a few nasty fungus diseases that nail crucifer crops in the greenhouse. Your temperature range indicated is pretty broad but greenhouses, especially unventilated ones provide ideal conditions of humidity for fungal germination and having such a broad temerature range, can facilitate the persistence of more than one organism, even if an individual species does not have the ideal conditions to thrive. There may be more than one fungal pathogen there, even if the one causing the cottony growth is the most obvious one.

Plant fungi are usually identified based on the gross characteristics of the organism plus it's effect on the plant in question. Throw an environmental history into the mix plus a history of crop rotation, and or the existence of similar problems in the past and if enough pieces of a known puzzle are present a diagnosis is possible. Seldom is microscopy employed, mainly because the micro technique required is quite specific and high and to most people who are not plant pathologists, one fungus under the microscope can easily look like another.

The cottony mass would indicate, possibly sclerotinia sclerotiorum; or cottony stem rot .Other evidence comes from the physical look of the plant, itself. Based on the pictures, it looks like the seedling was growing in a small pot or plug, and was it next to other pots or cells in rather crowded conditions ? Was the soil sterile? The root structure seems dwarfed, the plant top heavy, and might have been hanging out of it's container allowing the basal part of the stem to drag against a soil surface. That area is the infected area. That's what it looks like , anyway.
Excessive fertility will produce large, quick seedlings with poor root development. Plants will wilt easily and require frequent watering , leaving the soil surface constantly wet and the soft plant tissues susceptible to soil borne pathogens like sclerotinia, especially if the plant can't properly support it's over developed leaf structure and parts of growing tissue contact the soil. In greenhouses plants are often crowded, producing areas of a wet shaded environment below a leaf canopy and the temperatures often in the 15-20 C. range. Sclerotinia sclerotiorum spores, which survive in the soil on infected plant debris thrive under such conditions and can easily develop and colonize soft plant tissues.
Other possibility is that the soft cottony mould development is a secondary fungus. Something like one of the damping off fungi has attacked the plant stem not yet girdling it but allowing the invasion of a secondary fungus but it doesn't really look like that because the stem doesn't yet have the wire like profile of a stem destroyed by damping off. Damping off does like low temperature conditions such as you have described have existed. Greenhouses shouldn't go below 20C. for seedlings otherwise damping off can be a plague.

by lperepol
Thank you apochronaut, for your detailed comments! They are appreciated.
Cauliflower and Broccoli were seeded on September 1 2018. It braved the winter in an unheated greenhouse in Southcentral BC Canada (Kootenay Area). Temperatures did drop to -7.8° C over winter. The cool winter temperatures did not kill off the Cauliflower or Broccoli. The soil was not serialized. It was a mix of vermicompost and soil from a larger garden. A few cauliflower and broccoli plants are starting to form heads now March 18, 2019.

The Kootenay area has a history of fungal diseases. Humidity in the area is not high but there are many small wetlands sprinkled throughout the geography. I believe they are an integral part of the larger environment. Fungi blow in on the next windy day. Some years have little some other years, blight takes its toll.

Last year a few sunflowers plants were killed off by what I suspect was sclerotinia. And on another year I did see large black lumps growing inside of a few squash fruit. Another sclerotinia victim I suspect. Fungi attacks in the garden are seemingly sporadic affecting a few plants here and there, as opposed to being localized. One plant out of 10-50 is hit and the other plants of the same species besides it are unaffected --visibly.

I have been looking at them and a few others..

by lperepol
HI billbillt, I do not have experience with different microscopes. Comparing images from a research scope like an Olympus BX53, the photographic images from an Olympus BX53 have a better resolution -- clearer distinct borders. Though, price wise the Olympus would have to have 10 times clearer pictures. I am still learning. There are quite a few good options in software like Gimp that sharpen photographic images well. I am not familiar with all the microscopy techniques a professional would employ -- preparation, staining, mounting media, high-end glass slides and coverslips ...

On the Omax I am not seeing too much difference between plan phase contrast and bright field. The phase contrast does have a more pronounced and noticeable halo around objects. The image above is using brightfield not phase contrast. If I used phase contrast there would be some rainbow colours around the hyphae.

I do like the camera and ToupView software that came with it. Very easy to publish pictures and get feedback. For most of the objects, I do not know what I am looking at.

All mechanics on the Omax function smooth and well. I even completely disassembled it for a thorough cleaning. Some annoying particles got on an internal lens. I have to clean it again there are few visible particles when using a 100x objective. Being able to clean the scope is a big bonus - not sure how confident I would be cleaning a more expensive, higher end scope. Perhaps the higher end scopes seal better and cleaning frequency would be reduced?

Overall, I am very happy with the Omax. It does a good job.

by billbillt
Thanks for the quick reply!...

by apochronaut
I am a little confused by the picture you posted of the hypha/aerial hypha/sporangiophore of your fungus. Did you stain it? I'm just wondering why it is so blue? Was that shot using PC or just BF?

by lperepol
Yes, I stained them with lactophenol cotton blue.

>> Was that shot using PC or just BF? Bright Field

I did find some something that looks like fungi that are a navy blue and some for sure fungi that is a bright red for some reason -- both of these were not stained. I see the red fungi on and in most of the vegetable bulbs and roots but just single strands -- but now I have spotted a small cluster of them growing. I am trying to grow them out. If I can get good pictures I will post them.

Here is a picture the red fungus growing, looks like a few blue ones in the background. The picture was taken using a stereoscope. Too small to sample with my shaky hands right now.

by mnmyco
Mycologist here. You just have hyphae and there is really no way of IDing it based on the photo alone. Fusarium species are very common and can come in many bright and distinctive colors. Until you find a spore producing structure I am afraid the best anyone can do is point towards a group of fungi.

mnmyco wrote:Mycologist here. You just have hyphae and there is really no way of IDing it based on the photo alone. Fusarium species are very common and can come in many bright and distinctive colors. Until you find a spore producing structure I am afraid the best anyone can do is point towards a group of fungi.

There is a link to some images of the plant that was affected , not just the stained hyphae.

by mnmyco
I missed those. Thanks.

It looks like there is a mucor-like species, perhaps a aspergillus as well, and then the purple colored one, I am not so sure about.

by apochronaut
With cole crops grown in a greenhouse under the conditions he is describing, especially given the fact that the area of infection is part of the stem trailing against the soil and likely shaded by a leaf canopy, many agronomists would suspect a Sclerotinia sp.

by lperepol
Thanks apochronaut. I believe I may have a few varieties of Sclerotinia. I think it is common in the area -- also affecting squash and sunflowers. Locals seem to attribute most plant stem and roots issues with pythium. I am sure how that got started.
All times are UTC
Page 1 of 1