The SZ7 is a great stereoscope and frequently used examples come up with the coaxial illuminator option either with the housing or with a conspicuous void in the back (the bulb holder in the picture below is almost invariably gone). Coaxial illumination may not be the best option if you're not inspecting smd solder joints, but why have so many of the scopes had their illuminators removed? They shouldn't be transferred from one scope to another and have serial numbers to indicate this, however, they were likely taken off and thrown away, as every one I have seen has had the same problem. Here is a representative image I found on the Internet, and mine looked even worse:

The analyzers are two flat glass discs with a plastic film in-between. The get so loose and garbled that with the illuminator in, you can't see your sample well. I've seen five examples like this and no examples of the analyzers remaining intact. If there are some out there they must be coveted by their owners. You can remove the analyzers easily with a knife, but then you get the reflection problems they were intended to mitigate in the first place. I'd like to be able to use this illuminator! It has fun carousel stained glass inside!

Anyways, these are very easy to separate: I put mine on top of a 15 watt light bulb and then dunked into a glass of water. The film inside is unusable, if not before this procedure than certainly after it. There are no coatings on the glass discs. I can finally use that Norland cement I got for something-- plastic sandwiched between two flat surfaces sounds like an assembly job I can handle
1942 Bausch and Lomb Series T Dynoptic, Custom Illumination
Top

I have also not ever seen one that wasn't extensivelt delaminated. These scopes always seem to have other issues too--these were industrial scopes so probably tend to have a harder life.
Top

Luckily this one is nearly perfect, although I have had my eye out for one for the last year and if you want to pay prices like I pay your have to wait again at least that long as most had eyepiece tubes missing, objectives removed, piece of masking tape over where an illuminator had been, carvings, stickers, graffiti, dents, gouges-- hard wear by operators unused to delicate things!
1942 Bausch and Lomb Series T Dynoptic, Custom Illumination
Top

SO, if you were on the edge of your seat thinking about how to get your own SZ7 coaxial illuminator working again, I fixed mine with good results! First off, after seperating the glass bits from the old polarizing film, I glued, with the optical cement mentioned above, new film on one side (remember to take the protective layer off!) then trimmed off all the excess around the glass and glued the second bit on. The sun worked well for a UV source but I also had a cheap flashlight obtained at an auto parts store to perform the initial quick set where the glue can still be adjusted.

Now a kind-of tricky bit is that the polarizers have to be lined up perfectly for each eye. I did this by removing the illuminator and slowly rotating the polarizer with forceps in its socket while the light was one. When the reflection disappeared I assumed (correctly I think) that this was the right orientation. Then it was just a matter of making a fixture to hold the led in the right place. Here it is for all my woodbuddies out there to prove you don't need a 3D printer just your Jr. Woodchuck penknife and some gumption: 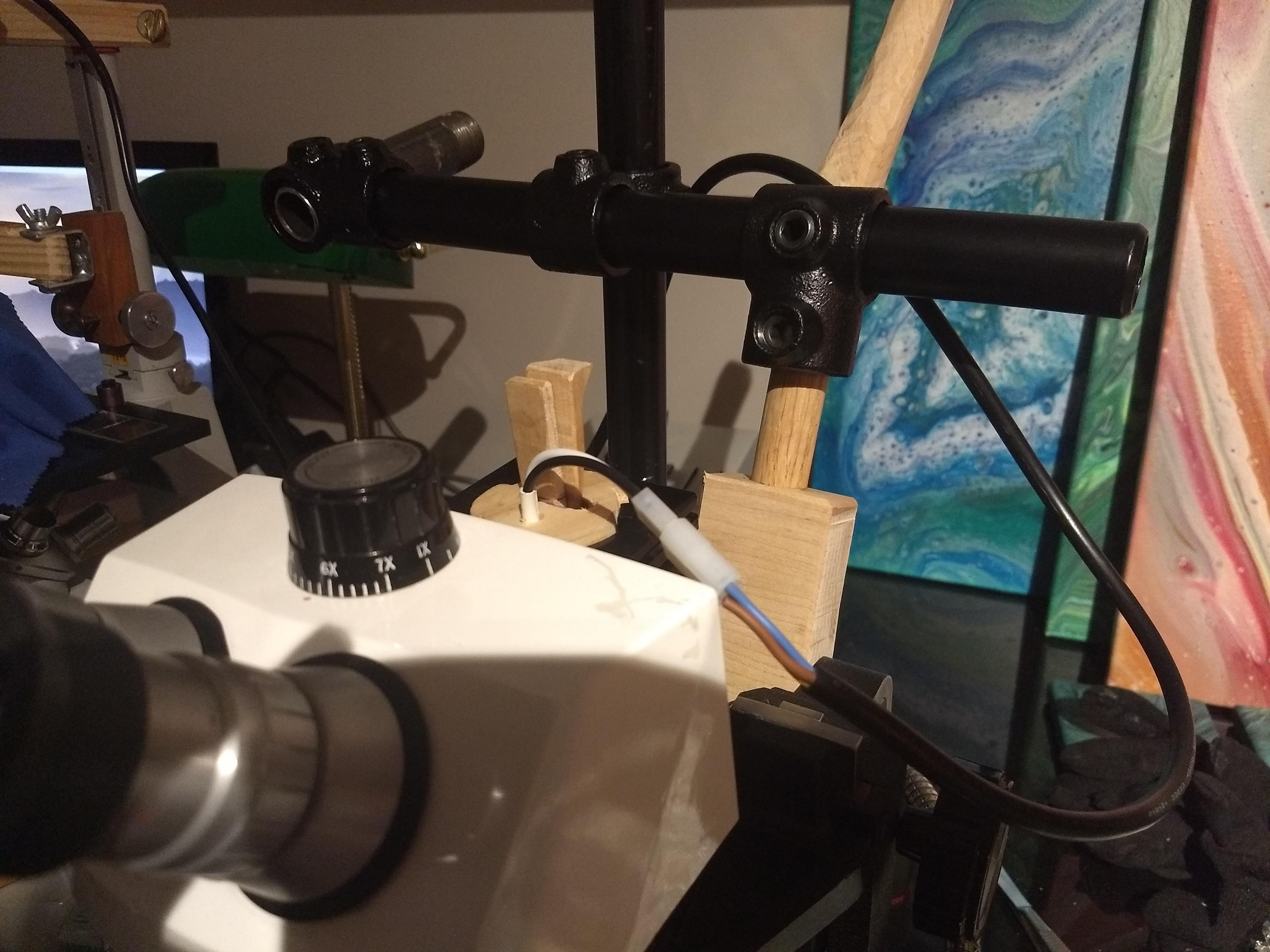 Here it is in place. 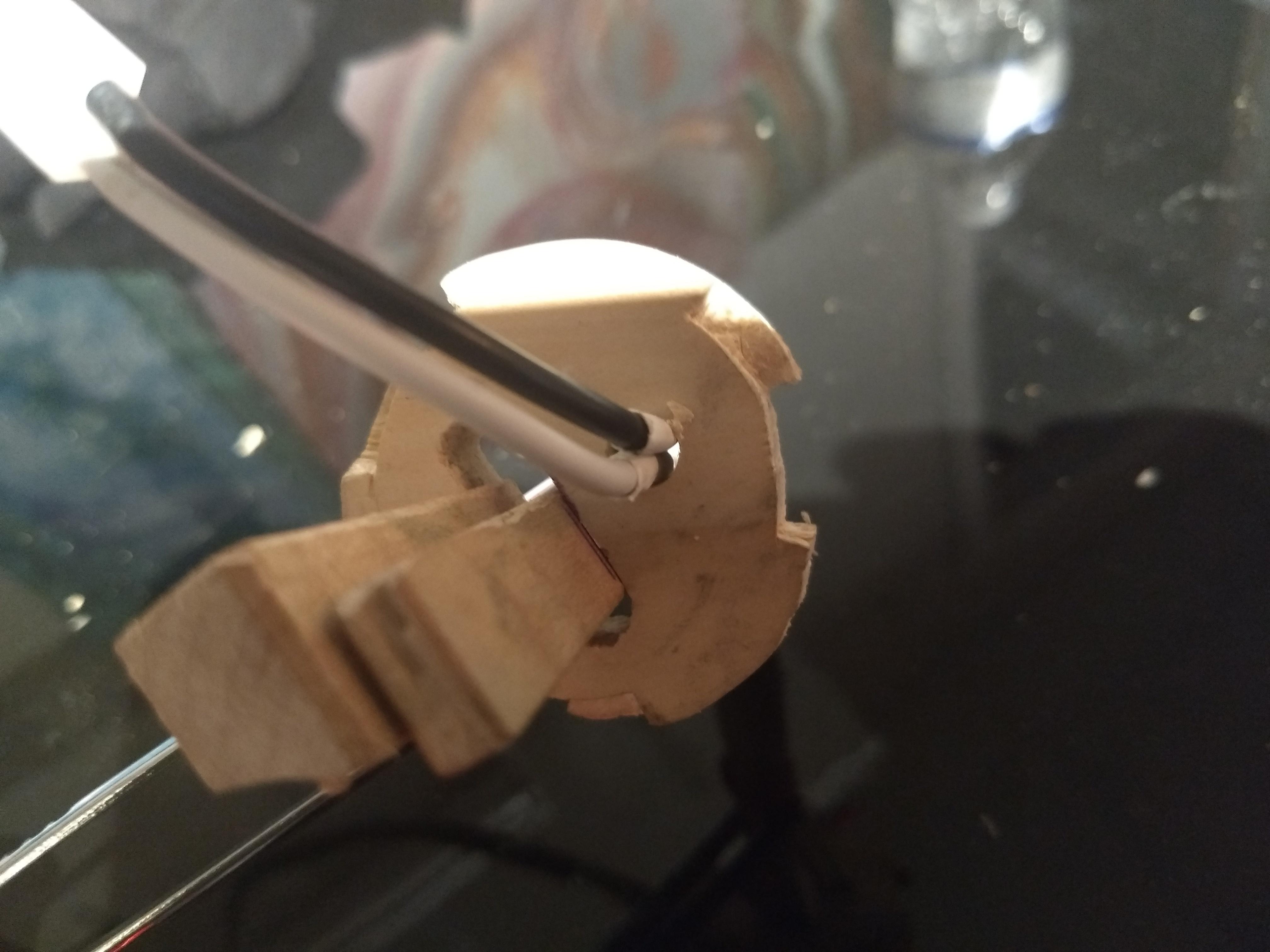 Dorsal view. The filament of the bub originally had to be held in a very specific place to focus simultaneously through both eyes. I cut a big slot so I could move around a plywood fork with the light attached to it. 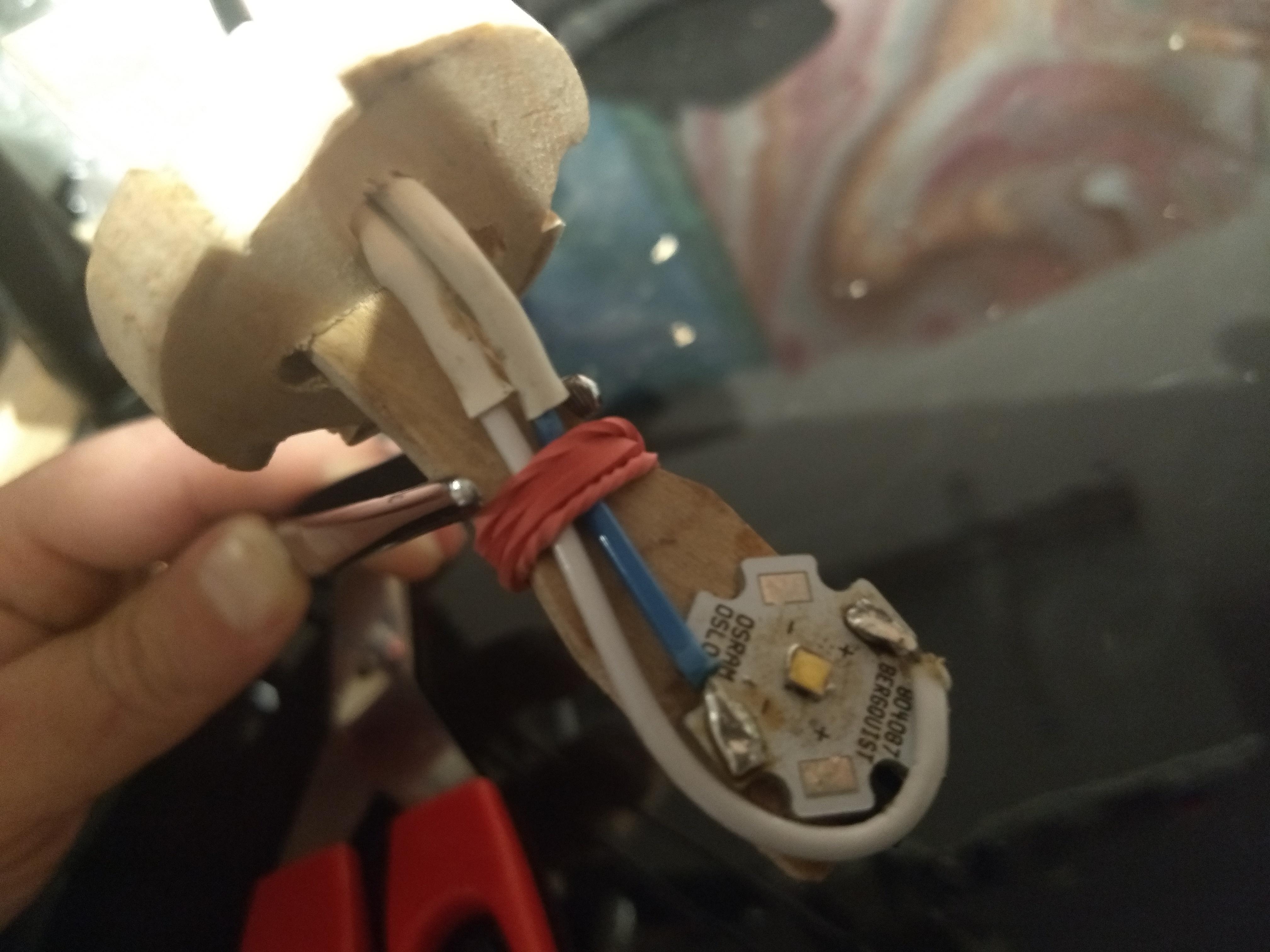 It is the Osram Oslon and I would recommend you get one already soldered onto the star plate as these tiny SMDs are a real pain in the but to solder properly. The original leads were too stiff is why I attached other ones. 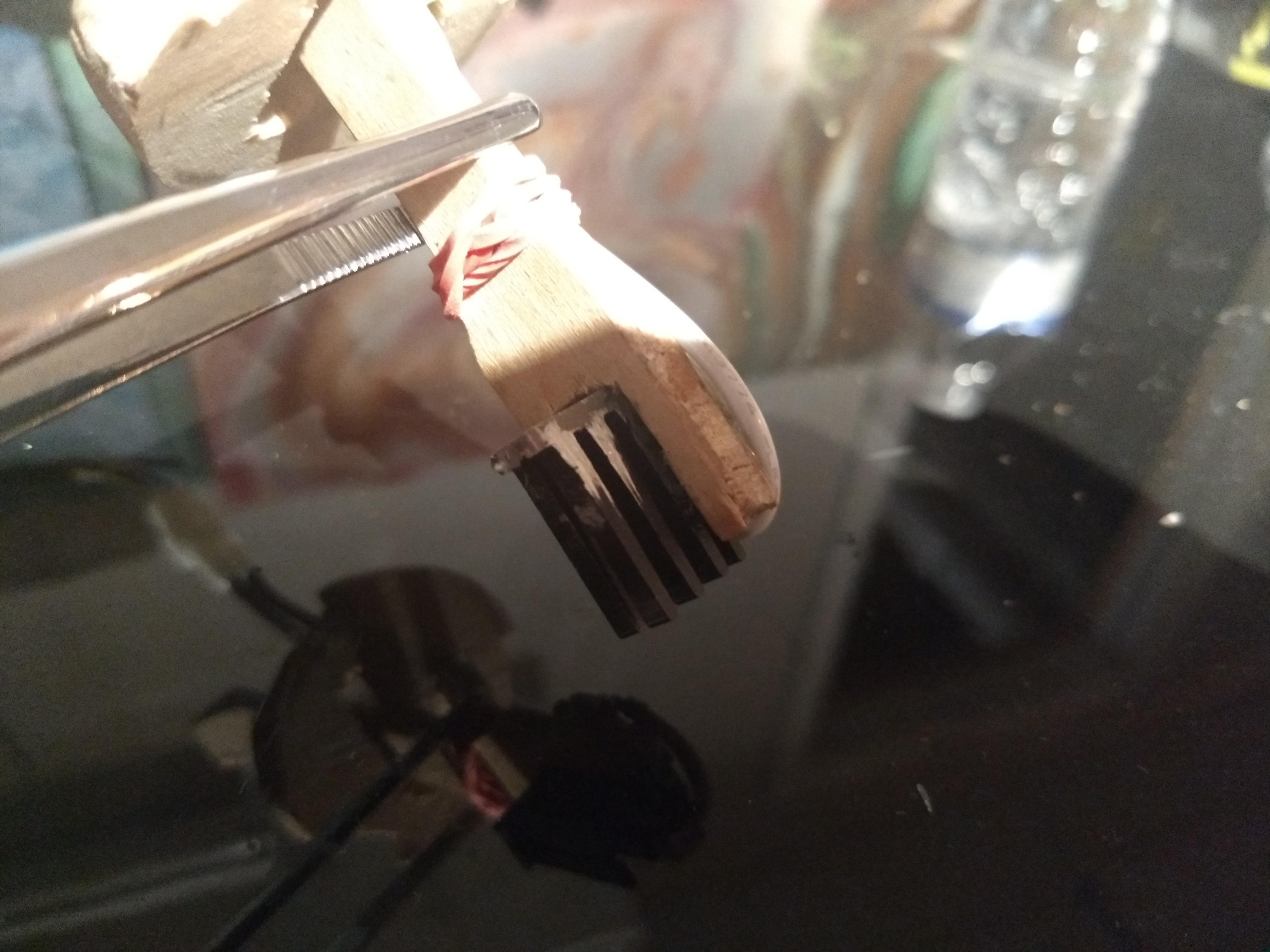 It is a fork so some kind of heat management can be used look I know it's on sideways it's a small space and I tell you the placement has to be exact. 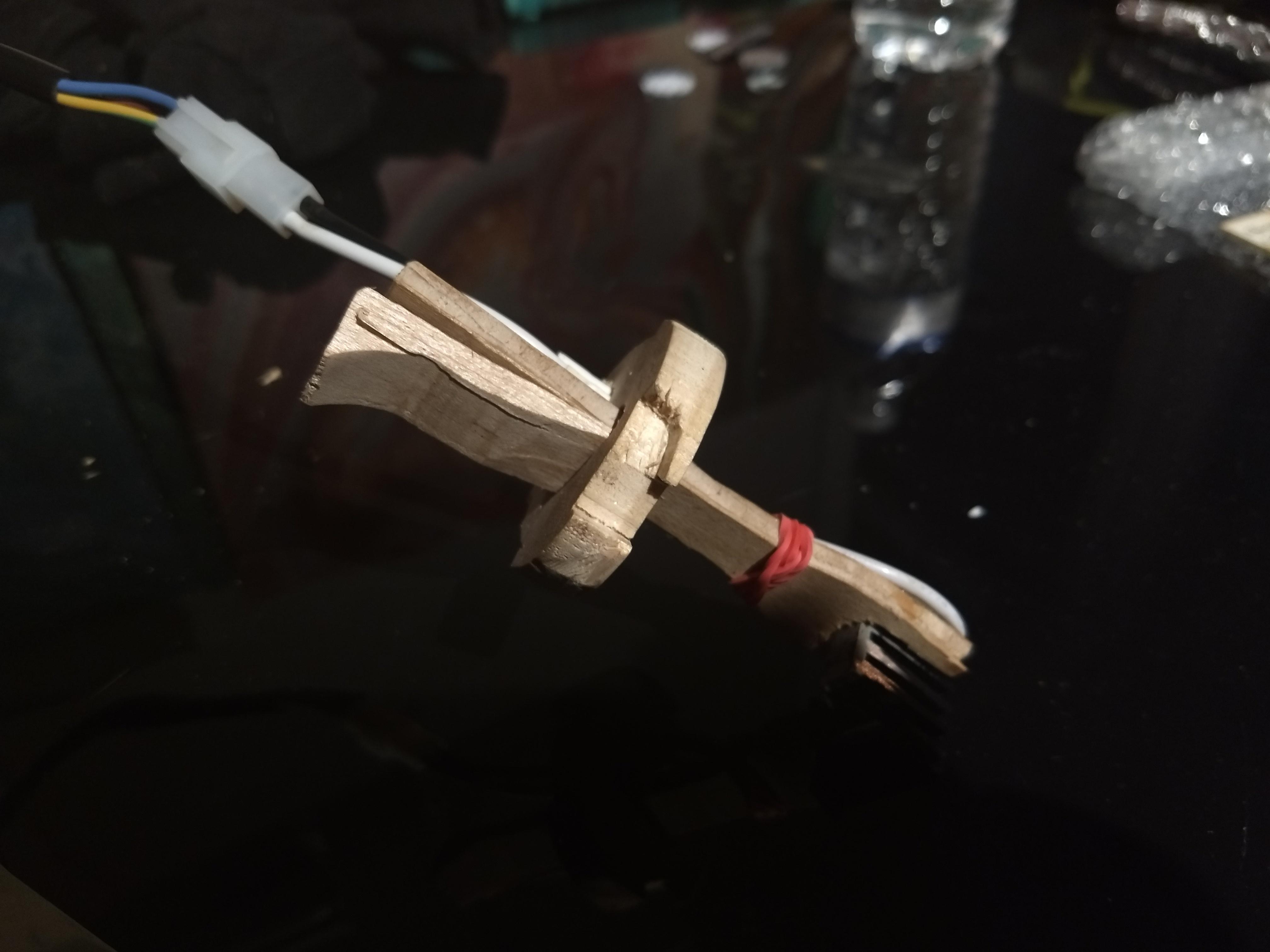 I don't have annular cutters I just used a scroll saw and yeah, when you get the LED in the right spot, a wooden wedge is tapped into place with a small hammer. Works great. 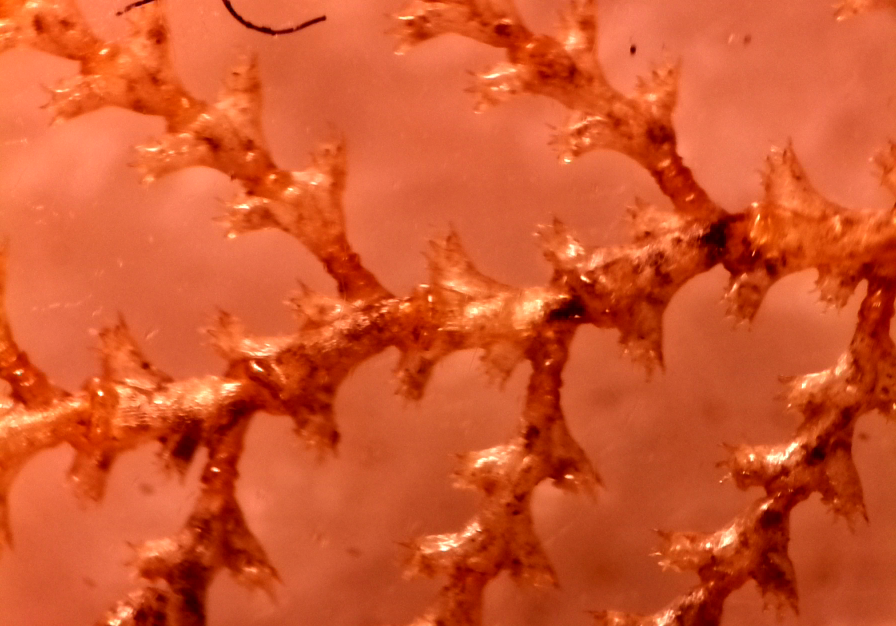 Halogen oblique lighting of a dry mount slide labeled Sertularia Pectinata. I am not sure which Sertularia this is. It is somewhat difficult to illuminate this sample well from the side. 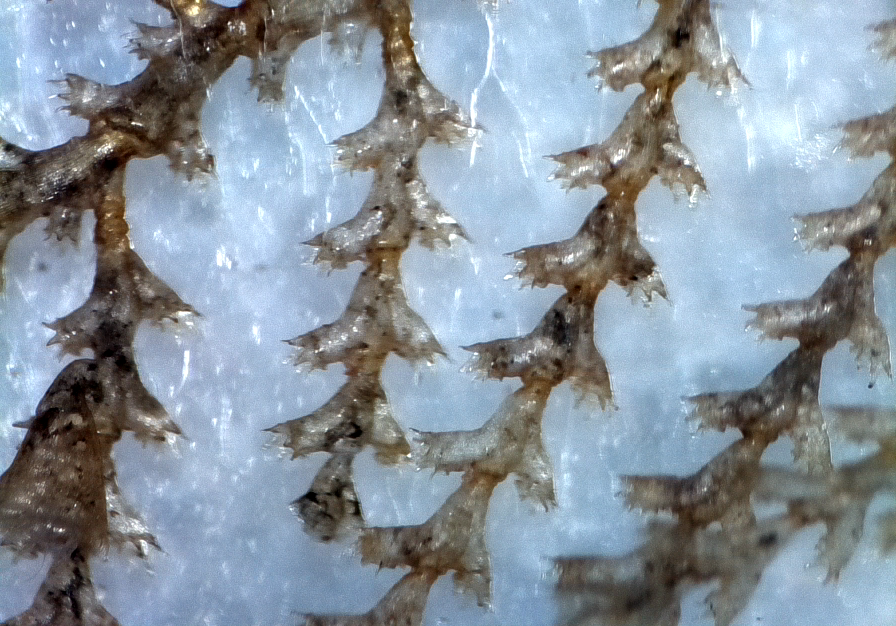 Coaxial lighting. I am having a little trouble getting pictures in focus using the eyetube camera. The images look pretty good in person, although I feel at some point down the road I might try a little adjusting to make this scope a little more comfortable on the eyes.
1942 Bausch and Lomb Series T Dynoptic, Custom Illumination
Top

Nice work, where did you get the polarizing film? After your first post I was doing a bit of reading trying to understand why polarized, coaxial illumination is supposedly so great for looking at circuit boards, as I keep seeing mentioned. I still don't really understand, but I did come across this Bausch & Lomb patent. Does it look like the SZ7? In the patent it sounds like the illumination actually crosses over with the left eye view passing light from the right side and vice versa? Is that how the SZ7 coaxial illumination works?

That looks like the correct patent and you get two circles of light that converge to one as you focus. I replaced the analyzers, which are directly in the light path. The light coming from the lamphouse is first polarized so that any light or glare bounced directly back up without striking the sample is extinguished by the analyzer. I don't remember exactly where this sheet came from but it's just linear polarizing film like what you can get from American Polarizers Inc and such. It's around $15 for an A4 sized sheet.

BramHuntingNematodes wrote: ↑
Sun Oct 04, 2020 5:37 am
I think coaxial light is good for circuit boards as it doesn't cast appreciable shadows.

Makes sense, that's what I like about the fiber optic ring light I currently use. Not very nice lighting aesthetically but good for seeing between/behind component leads and no shadows when reaching in with tools.
Top

It is widely accepted that:

The extent to which polarization occurs is dependent upon the angle at which the light approaches the surface and upon the material that the surface is made of. Metallic surfaces reflect light with a variety of vibrational directions; such reflected light is unpolarized. However, nonmetallic surfaces such as asphalt roadways, snowfields and water reflect light such that there is a large concentration of vibrations in a plane parallel to the reflecting surface.

... so : To what level of microscopic magnification does this remain true ?

Note: I suspect that the device under discussion works particularly well with circuit boards because they contain a mix of metallic and non-metallic surfaces.

MichaelG. wrote: ↑
Sun Oct 04, 2020 9:39 am
Note: I suspect that the device under discussion works particularly well with circuit boards because they contain a mix of metallic and non-metallic surfaces.

I was also suspecting the benefit would have something to do with attenuating specular reflections from solder joints relative to diffuse scattering from other stuff but I don't see how this particular system would accomplish that theoretically and Bram's comparison photos don't really appear to show a consistent or obvious difference in that regard. As Bram said, polarization-preserving reflections of light from one side (off either specimen or internal lens surfaces) should be attenuated if returning up the same side, but the way the polarizers are arranged it seems like light can still cross over from one side to the other via specular reflection from the specimen?

That quote about polarization and reflections is referring to the Fresnel equations, I think? The differences in reflection coefficients of s-vs.-p polarized light are small when incidence is near perpendicular, so probably not very significant in the case of coaxial illumination?
Top

hans wrote: ↑
Sun Oct 04, 2020 6:49 pm
That quote about polarization and reflections is referring to the Fresnel equations, I think?

I may be wrong ... I do struggle to understand polarization ... but I think the important thing is that a metallic surface has no dielectric layer [so, no refractive index] and therefore Brewster angle is intrinsically irrelevant.

MichaelG. wrote: ↑
Sun Oct 04, 2020 9:16 pm
... but I think the important thing is that a metallic surface has no dielectric layer [so, no refractive index] and therefore Brewster angle is intrinsically irrelevant.

Agreed, what I was suggesting is that Fresnel reflection probably also has negligible effect on polarization in the case of coaxial illumination, because the angle of incidence needs to be close to perpendicular in order to get reflection back into the microscope.
Top

As I recall the two analyzers are turned relative to each other so that any light from one path bouncing off a first surface mirror or metallic surface would not be extinguished by the analyzer from the second path. That's what it looks like anyhow
1942 Bausch and Lomb Series T Dynoptic, Custom Illumination
Top

BramHuntingNematodes wrote: ↑
Sun Oct 04, 2020 9:39 pm
As I recall the two analyzers are turned relative to each other so that any light from one path bouncing off a first surface mirror or metallic surface would not be extinguished by the analyzer from the second path.

That's how I was interpreting the patent drawing, assuming the dots indicate polarization perpendicular to the page.
Top
Post Reply
13 posts • Page 1 of 1