In my quest to better understand the optical behaviour of hemispheric lenses and their relationship to NA, I stumbled upon this recent paper that provides a systematic overview of microscope objective designs. The authors put together a large database on patented objective designs and classified the designs according to their historical context and optical design parameters. Very interesting reading! 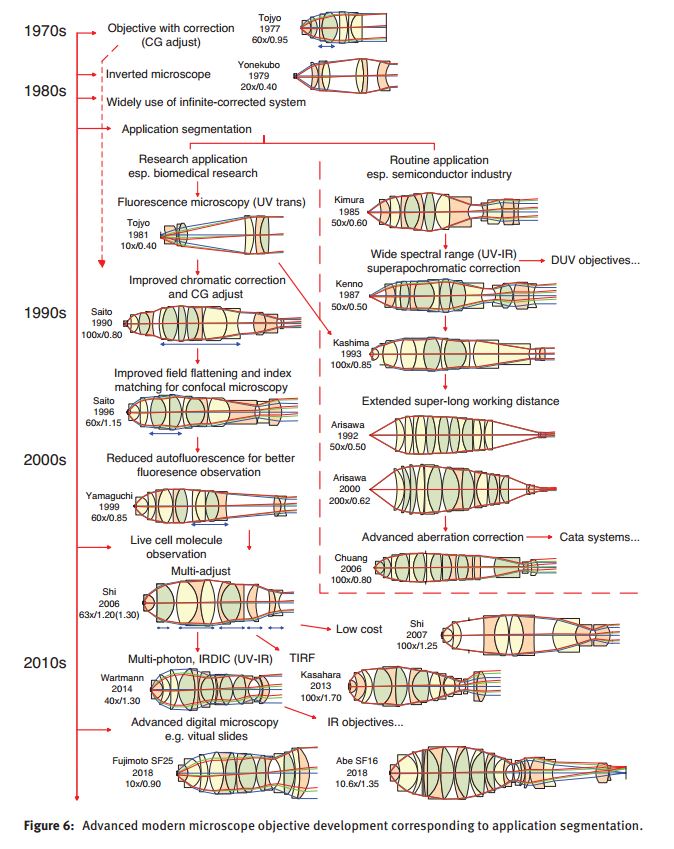 Well found, Viktor
... Strangely enough, I stumbled across that a couple of days ago
Part II is also available (split into two files)

and also part III , volume 8 , issue 5 in De Gruyter. The papers are quite interesting and authoritative in general but leave out extensively used but eventually superceded systems that were very highly productive over long periods of time and highly influential. Bausch & Lomb patents , those of Michael J. Buzawa and Harold Rosenberger, are significant but possibly due to the the designation of them as "semi-objectives" , they were considered outside of the scope of the papers. The simplified 1.20 N.A. objective of K.D. Sharma , of Leica too.
Of as much interest and education are the addendums to patents which contain acknowledgements and citations, sometimes leading one to the real inventors . There is a continuous stream of H.E. Shoemaker's patents being cited by Olympus and Nikon, so much so that one might wonder just who invented their original infinity corrected systems. Getting around patents with paper thin changes, has been the stock in trade of Japanese industry since before the second world war, or they outright just stole the designs when they could. No mention , or not that I have seen of Reichert's Lambert J.Danner's or Walter J. Bogath's patents who moved the infinity corrected systems forward in the 1980's either, or for that matter, those of Milton Sussman and Robert M Mueller, both of who moved the development of the infinity systems forward at AO going back to the early 60's and therefore the development of the entire industry.