Here you can discuss everything related to taking light micrographs and videos.
Post Reply
4 posts • Page 1 of 1
Message
Author

I previously wrote up a solution for this which involves a segment of pvc pipe and a 38mm to m42 adapter, but this one is actually cheaper and looks less like a length of PVC pipe with a 38mm to m42 adapter.
The Olympus Photomicro L is a beautiful adapter which grabs onto the 38mm dovetail of an Olympus BH2 series microscope and acts as a spacer to put an SLR camera the proper distance above an NFK series photo eyepiece. They're beautifully designed (the nicest looking camera adapter you're likely to find from any brand) but kind of rare and usually expensive. Diagnostic Instruments made the PA10-a adapter which works perfectly but is also sort of rare and often expensive when it comes up. So alternatives are called for. 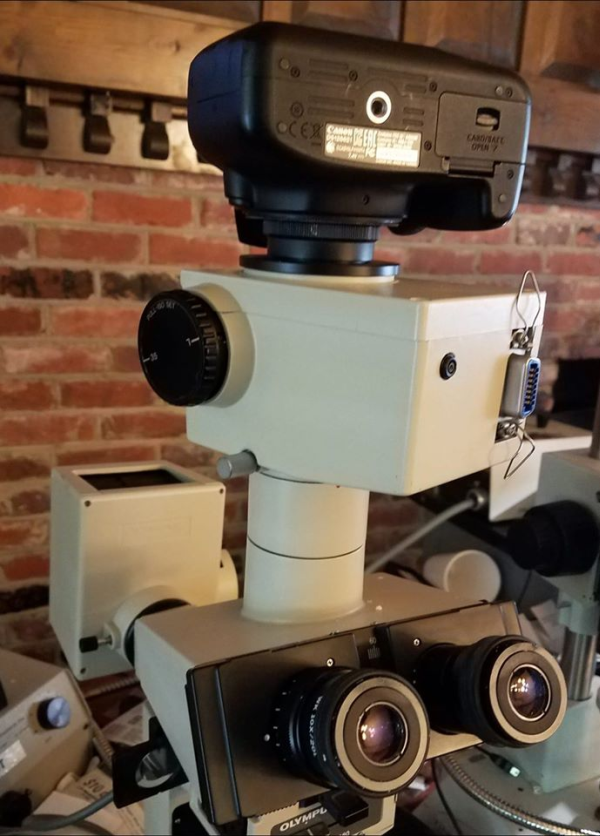 Long story short, Olympus made a lot of camera adapters, including the PM10a (and other similar ones) which included a shutter mechanism and beamsplitter with eyepiece to preview the image. They connected to a specialized microscope camera, and are often available inexpensively since these are obsolete. The bottom has a nice clamp for the BH2 photo dovetail, and the insides can be safely ripped out since they're no longer necessary (though it feels a bit bad to do) allowing light to pass through.
The microscope camera has a shorter flange focal distance than a dslr, so you can't directly adapt onto the camera mount. You can, however, unscrew the mount, revealing a 67mm thread. With a 67mm to m42 adapter (ie https://www.amazon.com/…/B0…/ref=cm_sw_ ... KEbTA3FEVD), a medium m42 spacer (the standard ones you get on eBay as part of a three pack for very little) and an eos to m42 adapter you have a fully functional and parfocal adapter for a fraction of the typical price. It's kind of bulky though and will sit cockeyed on your scope since the orientation of the camera is co trolled by how the threads happen to line up.
Top

Is that a serial RS232 port on the adapter? What does it do?
Daruosh.
Top

Once it connected a controller that would operate the shutter. Now it plugs the hole so light won't get in.
Top

Now it plugs the hole so light won't get in.

Return to “Camera systems and imaging”