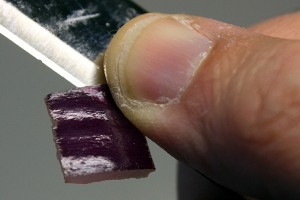 It is possible to observe the plasmolysis of cells under the microscope. When salt water is added to onion cells, then the cells will lose water due to osmosis, this can be observed.

Method for obtaining a single layer of red onion cells

For this experiment, we can not use the onion skin which is found between the layers of the onion. We need a single layer of pigmented cells. These cells, however, do not separate easily.

Water from the cells moves to the surrounding salt water. The shape of the cells does not change, the cell wall maintains the cell shape. The cell content (the red part of the cell) starts to shrivel up. At the same time it is possible to see that the intensity of the red pigment increases because it becomes more concentrated as water is removed (the red pigment is not able to move out of the cell). The process can be reversed when the salt water is removed and when distilled water is added.