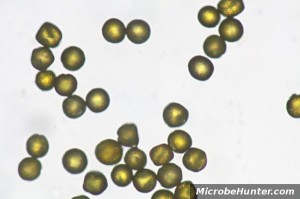 I tried a little experiment by observing pollen from a plant (in this case the buttercup, Ranunculus), mounted in five different ways:

All observations were made using a 20x achromatic objective.

The images on the right show that the mounting method has a significant impact on the way that the pollen grains appeared. The results can be summarized as follows:

What can we learn from these observations?

So which mounting medium now results in pollen grains with a “true” or “correct” shape? The problem now is: what is the “correct” shape? Biological specimens may change their appearance depending on the environment. After a rain shower, the pollen may have a more roundish appearance, after having osmotically absorbed much liquid. Pollen that has dried in the air may resemble more the shape of the Euparal and nail polish samples. The choice of the mounting medium may therefore even include these considerations.

The 1-stop-shop (US and World)
Lots of microscopy-products
from Amazon here!
For the Europe Shop click here!