Download the magazine for a PDF version of this article:
Microbehunter Magazine (Issue 53)

Microscope cameras available on the market today can be connected to the computer over a Universal Serial Bus (USB) port. Many of them use the USB 2 standard. Modern computers increasingly come with USB 3 ports, which are up to 8 times faster then USB 2. Some manufacturers have caught up with this trend and are now also offering USB 3 capable microscope cameras. You need both a USB 3 capable camera and a USB 3 port to benefit from the high speed. 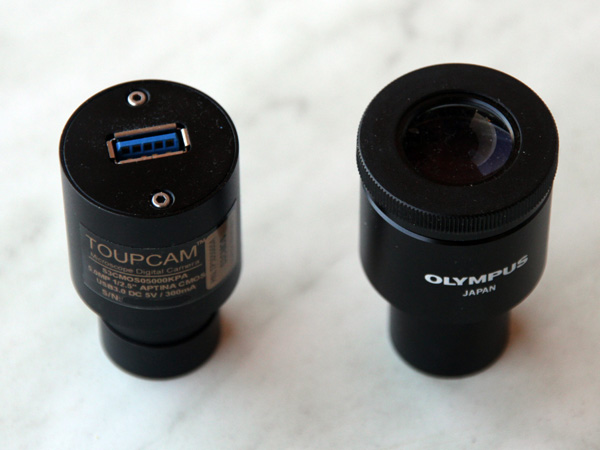 The high transfer speed of USB 3 now allows for the capturing of full HD video (1920 x 1080 pixels) at a frame rate even faster than 25 frames per second. A high frame rate is important for a smooth video, and slower USB 2 cameras only provided a high frame rate if the resolution was lower. This is a trade off, and one can not have both.

One other option for obtaining full HD videos at high frame rates is to somehow connect a video-capable digital SLR camera to the microscope. In this case there is no need for a computer connection and the video is recorded directly onto the camera’s memory. This often requires much space and a dedicated adapter for the SLR camera, a special photo projection ocular, and therefore might also be expensive.

I have been using my USB 2 microscope camera (3.2 megapixels) for several years now and thought that it is time for an upgrade. Most USB 3 cameras are extremely expensive, but I was lucky enough to find an affordable one by the company Touptek.

The Toupcam S3CMOS 05000KPA is a 5 megapixel camera with a 1 / 2.5 inch sensor. The small size of the camera is the most striking feature from the outside. It is about the size of an eyepiece. A closer inspection revealed, however, yet another surprising feature, one that can not be found in many other USB microscope cameras: the S3CMOS does not have any reduction optics! The image is projected directly from the objective onto the sensor. There is a protective glass plate in front of the sensor for sure (which might also act as a filter), but there are no lenses. Other microscope cameras contain reduction lenses that increase the field of view of the camera, and reducing the magnification. These reduction lenses also project the image to the camera sensor, which is located further aft inside the camera body. This reduces the need of refocusing. 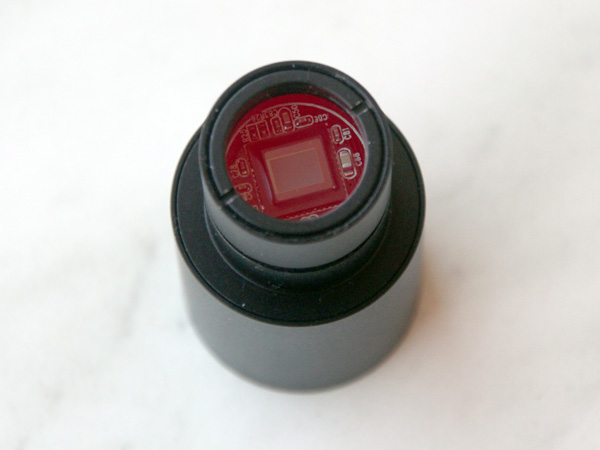 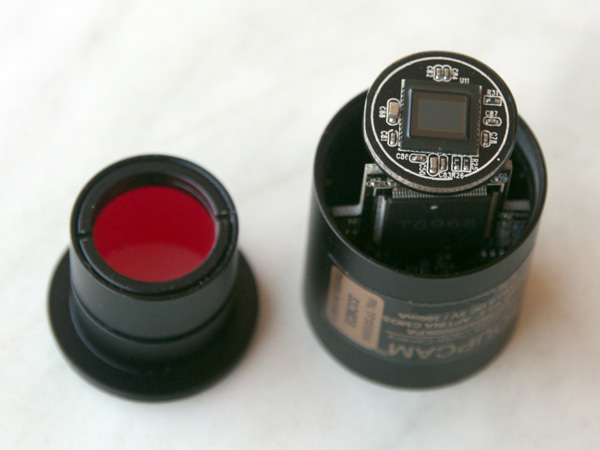 I then saw, that the company solved this issue quite elegantly. The camera’s sensor is located quite far forward, making reduction optics obsolete. As a matter of fact, the sensor can be found in the barrel of the camera that is inserted into the tube of the microscope, and not inside the main camera body. When the camera is inserted, the sensor ends up inside the tube of the microscope. The forward location of the sensor reduces the sensor to objective distance, and the camera picks up the intermediate image (which is produced by the objective) there where a regular eyepiece would pick it up. The advantage is, that there is little to no refocusing needed when switching between camera and visual observation.

Other USB cameras have the sensor further backwards inside the camera’s body. These require additional reduction optics in front of the sensor in order to prevent the requirement for refocusing.

There is one disadvantage, though. The field of view of the camera is indeed significantly smaller than the field of view of my older USB 2 camera, which did have reduction optics and also a larger sensor, which was able to capture a larger part of the image. This is not a big issue though, maybe a question of taste, as you can always switch to a lower magnification if you need to see a larger area of the specimen.

I wondered why the company did not choose a larger sensor to increase the field of view. A larger sensor would also have reduced reduced noise. An answer may be found when looking at the camera from below: Having to move the sensor into the barrel of the camera results in space problems, and I think that this might be one reason why a larger sensor was not chosen. Having said that, noise is generally not an issue, as the microscope light is quite bright anyway.

The camera does not have a C-mount, and therefore it is not possible to attach reduction optics. The Touptek website does state that it is possible to convert the camera to C-mount. You need a so-called “C-mount adapter housing”, which looks like a tube that you slip over the barrel of the camera. With this adapter I can then connect the reduction optics of my old camera.

This might become important when stitching images together. The software simply has an easier time to process images that do not show distortions at the corners. If you need to capture a larger image area, simply use an objective with a lower magnification.

The USB 3 ports and drivers of my computer gave me quite a bit of a headache at the beginning. Even though I connected the camera to a USB 3 port (with the appropriate USB 3 cable), the camera would still only operate at USB 2 speed. The frame rate, is indicated in the software Toupview and it was really slow at the beginning (around 2 frames per second at maximum 5 megapixel resolution). Sometimes Windows gave a message, that the device is capable of operating at a higher speed.

I had to do several things to resolve this problem. I did a BIOS upgrade, re-installed Windows 10 completely (which was probably not necessary, but I wanted to play safe) and turned off the energy-saving feature of the USB 3 ports. Last, I updated all USB drivers. As this also did not resolve the issue, I deactivated USB 2 in the BIOS and this forced the camera to work in USB 3.

It took me some Internet research to figure this out, however, and I mention this now in case some of the readers experience similar problems. Sometimes unplugging the camera and then re-plugging it also works. USB 3 ports on notebook computers apparently are not as fast as those of desktop PCs, so this is also something that you might take into consideration. Last, the frame rate that the camera produces depends also on the shutter speed being used and if the computer is busy with other things. The Touptek website also includes information how to deal with related USB connection issues.

The USB 3 problems are generally not even that uncommon. I read, that some computer hardware manufacturers, evidently, do not fully stick to the specified USB 3 standard. More modern computer motherboards might operate more reliably with the camera than my current one, which is already several years old.

The camera has a very fast shutter speed (0.122ms). This makes stitching images together very convenient. When stitching images together, one has to (traditionally) take overlapping pictures, which are then assembled into one final image. The free software MS-ICE also accepts videos to make a panorama. I took a video of a specimen by filming all parts. Using the mechanical stage of the microscope, I “rastered” the whole specimen. The fast shutter speed makes it possible to move the slide without introducing motion blur during the filming. It was therefore possible to film the specimen much faster than with my old USB 2 camera. The program MS-ICE extracted individual images and assembled them into a final stitched picture. The calculation time took quite long, but the filming was completed in the fraction of a time that it normally would have taken to make overlapping images. The results that I got were also better than the results that I got with my old USB 2 camera. The smaller field of view (due to the lack of reduction optics) eliminated distortions at the side of the pictures, and as a consequence the final stitched image was also not distorted.

At this point it should also be mentioned, that the software Toupview also allows you to easily stitch overlapping images together. The small field of view can therefore be easily compensated by the software.

The Toupview software allows you to choose different resolutions for taking pictures and videos. Generally, the higher the resolution, the slower the frame rate of the camera, because more data has to be transferred over the USB cable. I did notice, however, that this is not always the case. Sometimes even the lower resolution did not increase the frame rate. This is because the camera still captured the image in high resolution, but it was then reduced in size by the software itself. I did notice that the frame rate sometimes fluctuated a bit, especially when the computer was doing other things as well. I was able to determine the following frame rates:

Particularly interesting is the 1280×720 resolution with about 50 frames per second. This would allow for the filming of fast movement (cilia of paramecia, etc).

The advantages of the camera can be summed up as follows:

Please note that I am not affiliated with the company.