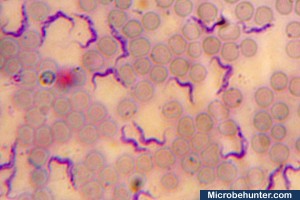 Trypanosoma brucei is a single celled parasite, which causes the sleeping sickness. The parasite is spread over insects, particularely the tsetse fly.

The parasite is transferred to the host animal when an infected tsetse fly bites a host animal to feed on blood. The parasite cells reproduce in the tissue of the host and then move to the lymphatic system and the blood, were the continue to reproduce. The image shows numerous parasites (purple) surrounded by red blood cells. The parasite can also attack the nervous system, which then causes the symptoms of the sleeping sickness.