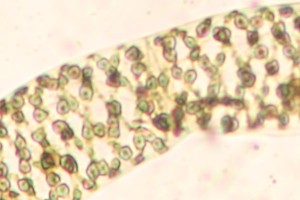 Let’s start this topic with a little example. You are in a shop and have a choice between two microscopes. One is capable of magnifying 100x, the other one is capable of magnifying 400x. Which one is better? Given only this information, most people would opt for the 400x device. A larger number, in the mind of the uninitiated consumer, means a better quality and more value. Technical and scientific instruments and even consumer electronics, such as digital cameras, have become increasingly complex and the consumers often demand a quick and easy measure to compare the different instruments. In the case of microscopes it is often the magnification, in the case of digital cameras it is the number of mega pixels, and computers are often compared using CPU speed and memory. Simple numbers, simple comparison. So a 400x microscope, in the mind of a lay person, will show you 4 times as much as a 100x device. It is not unusual to see „department store microscopes“ advertised with a maximum magnification of 1250x. This drive for large numbers is even visible in other optical devices, such as telescopes. I once saw an advertisement of a children’s telescope advertised with magnifications of 650x. The maximum useful magnification of astronomical telescopes is around 300x.

One thing that must be made clear to students is, that a high magnification is probably the easiest thing to achieve! Just take a picture of the image and then enlarge it to fill your living room wall. The only problem is, that you are not going to see more detail. The image is larger for sure, but also blurry and soft. A larger magnification does not always mean that the resulting image has a higher information content and more detail.

The maximum useful magnification for compound light microscopes is around 1000x. Everything above this value will result in „empty magnification“, that is magnification without further detail. The reason for this limit lies not in the manufacturing limitations of the optics, but rather in the physical nature of light. It is not possible to resolve details that are smaller than the wave length of the light used. In simple words, from a certain magnification upwards, the light is too „coarse“ to resolve more details.

One thought on “Magnification and Resolution”